Last blog with the work updates of GSoC 2020 after nearly completing the great project with great people💖 (it was just awesome). Will be surely sharing my complete experience of GSoC in another blog. So, coming to the final updates made to SBSCL last week with the meeting updates, here are the points: As discussed in the last blog, I updated the complete documentation of the library using maven and also updated the website ( https://draeger-lab.github.io/SBSCL/ ). Also, updated the README by adding the description from the new features and other minor fixes. Made a pull request (PR #57 ) with all the documentation updates. Last week, we could not have a proper meeting due to internship tests at my university, and I had just met one mentor for 20 minutes talk. He suggested me to add some guidelines for using the library with the diagrams showing the workflow of the library. So, I added the UserGuidelines.md explaining how to simulate different models using SBSCL. I also added the s
2 comments
Read more 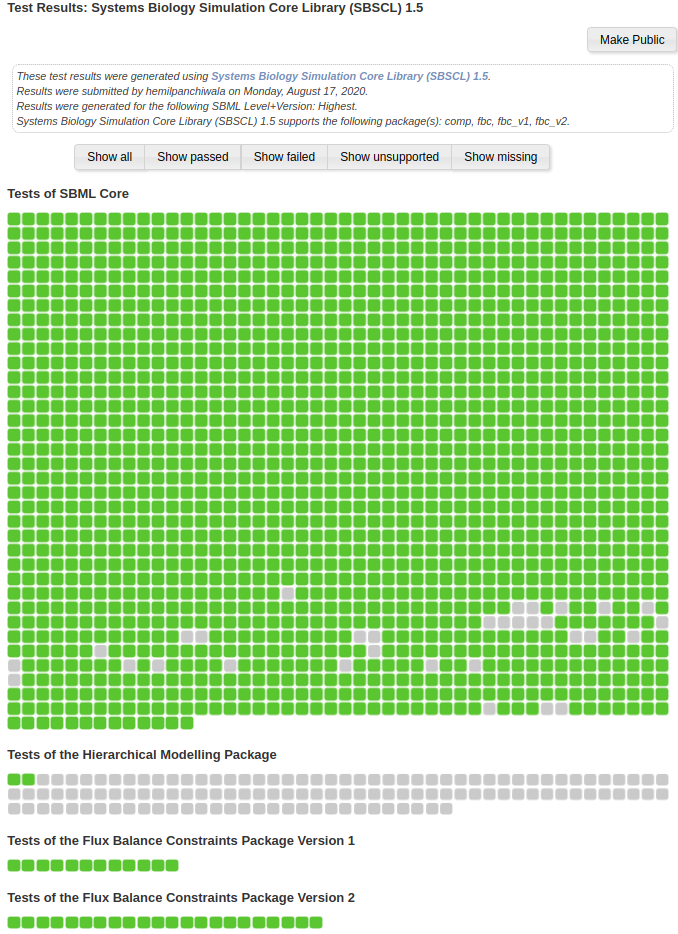 Last week, I mainly worked on formatting SBSCL and making some small updates. We also merged the formatting PR to the main repository. Here’s the quick review of the weekly meeting with the updates made: In the meeting, we decided to merge the existing PR (with stochastic simulation updates) after updating the SBMLTestSuiteTest and StochasticTestSuiteTest to identify tests automatically and also add a check to verify that the file is valid sbml or not. This was updated to the repository adding a method isValidSBML() to check whether the file was valid SBML and also the functionality of detecting the .xml files from the directory given. After this update and some requested changes by mentors, the PR #54 was merged to the main repository with complete support of stochastic simulation. We then decided to update the formatting of SBSCL and add config files for IntelliJ and Eclipse so that developers can use any for formatting the library. The work for this was done in the sbscl-formatt
Post a Comment
Read more

- August 13, 2020
Getting into the last phase of Google Summer of Code 2020, I mainly worked last week on updating the stochastic simulations support to make use of the present SBSCL classes and refactored different things. The summary of the work done with the meeting updates are: Mentors suggested merging the refactor-interpreter branch to the fern branch as reviewing PR takes more time, and there is not enough time left and also, after this two more PRs (with formatting and documenting updates) needs to be made. This is now done and also the PR is quite ready to merge now with many updates made this week. BiGG models tests were completely ignored before from the Travis build which has now been fixed with some minor fixes also in FluxBalanceAnalysis that now simulates all the BiGG models successfully. Also, I added the reference results from cobrapy and compared the SBSCL results with them, and all the tests passed successfully that confirmed that SBSCL works excellent with the SBML models with fbc
Post a Comment
Location: Deesa, Gujarat, India
Read more

Another great week and exciting news that I passed the second evaluations successfully😊. Again extreme thanks to the mentors ready to help and guide me at any moment. Last week, I mainly worked on refactoring the classes and enabling the feature of seeing processed results in realtime rather than waiting for complete simulation. Here’s the summary of the work done with updates from the weekly meeting: We discussed on the newly added class EquationSystem , which now has all the initializations from the SBMLinterpreter only left with the processing things. This now separates the things from SBMLinterpreter, which now makes it look more transparent and better than before. One of the mentors suggested refactoring various variables, comments, and methods in EquationSystem class more explanatory and proper as they didn’t seem to go better, which has now been updated. We also decided to make a PR with all the stochastic simulation updates ( fern branch in forked repo), and it is now open a
Post a Comment
Location: Deesa, Gujarat, India
Read more

- July 30, 2020
Last week, I mainly worked on passing the current failing stochastic tests and ran Travis CI successfully. With this, we also started working on refactoring the SBMLinterpreter class, which has become quite a big class doing many things. Here is the quick summary of the updates from the weekly meeting with the work updates: In the meeting, we mainly discussed the failing stochastic tests. We decided to work on them and check whether the results were converging towards the pre-defined results on increasing the number of simulations or not. If they don't, then it was for sure that there is some issue in the implementation. So, I started working on that, and the small issue I found was that while comparing with the pre-defined results, the wrong column was considered from the pre-defined results, which made some tests fail. It is fixed now through this commit . After this, on further checking, we saw that some of the tests were like failing all the time regardless of the number of sim
Post a Comment
Location: Deesa, Gujarat, India
Read more

This week I mainly worked on adding the support of the stochastic simulation to SBSCL. And, it is excellent that the simulation is giving great results with most tests passing. This addition of stochastic simulation has improved SBSCL supporting most of the simulation types now, which makes it a fully-featured simulation library. Now, here’s the summary of the work done this week with the topics discussed in the meeting: Mentors suggested writing the work done overview of the week before some hours of the meeting so that they can go through and provide their views in the meeting properly. We then mainly discussed the stochastic simulation implementation (using FERN) and the runtime due to simulating many times to get the mean and standard deviation. We decided to test all the models from the stochastic test suite and update the result format according to the test suite results. I worked on this mainly, and now the output format of the result is updated. The new test file StochasticTest
Post a Comment
Read more

- July 16, 2020
This week I mainly worked on the remaining issues of the SBML Test Suite, which I described in my last blog with starting work on support for the stochastic simulations in SBSCL. Here’s a quick summary of the last week’s meeting with the updates of the work done: One of my mentors suggested refactoring the master branch to the main branch. But it has not yet been done as doing this causes some issues in GitHub pages. Complete updates can be found at issue #52 created for this purpose. We discussed issues related to the models having events with delays and saw that things were going fine, so the only way to find the issue was to debug the code. Similar was the problem with converting the Algebraic rule to Assignment rule. After not getting a proper reason, we mailed the developer, Alexander Dörr, who implemented the events with a delay in SBSCL. We have not received his response yet, so we decided to get on this issue later. Also, AlgebraicRuleConverter has some problem in converting t
Post a Comment
Location: Deesa, Gujarat, India
Read more
More posts